THE CULTURAL HEART OF THE CAPITAL

Already in the 17th century, Plac Trzech Krzyży was the place where the most important Warsaw tracts converged. It was here, for centuries, that the most important events of the city took place. Today it is the location of fashionable cafes, restaurants and exclusive boutiques. We can also find here many important state institutions and private business.

Before the square was given its today’s name, it was called the crossroads of the Golden Crosses, from the gold-plated crucifixes set on columns. Then, until 1915, it was called St. Alexander’s Square. In honour of the patron saint of the church, designed on the model of the Roman Pantheon, which stood in the middle of it.
It was built on the occasion of the visit to Warsaw of Tsar Alexander I, in the 19th century the ruler of the newly created Polish Kingdom. Today, it is the venue for masses, baptisms, processions and wedding ceremonies for the inhabitants of the whole city. 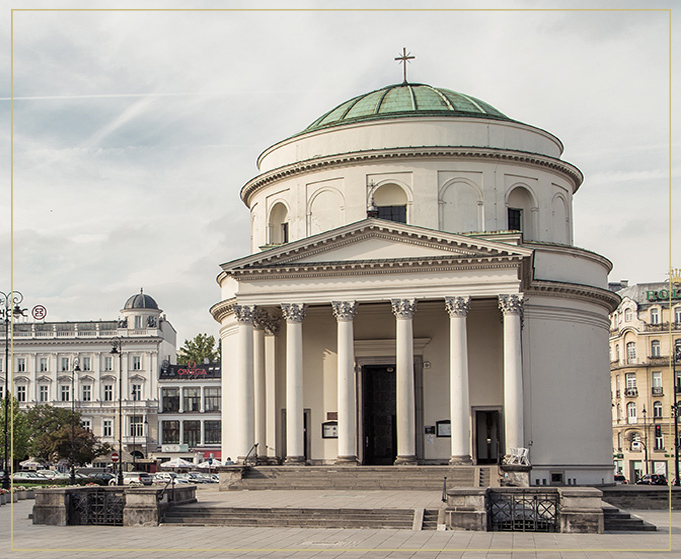 Three Crosses Square is one of the most important points of the Royal Route, the most representative street in the city. In the past it connected the royal residences – it starts with the Royal Castle, leads through the Royal Łazienki Park and ends with the real architectural pearl, the Wilanów Palace. Over the centuries, a lot of beautiful churches, tenement houses, residences and magnificent green areas have been built on the Route. Their beauty is still enchanting today.

One of the most important cultural institutions in Poland. Among the exhibits of the National Museum you will find outstanding works, from painting to craftsmanship, leading us from antiquity to the present day. Regular exhibitions representing art from around the world are held here. A unique attraction of the museum, attracting millions of tourists, is a huge painting by the 19th century painter Jan Matejko – “The Battle of Grunwald”. The painting has impressive dimensions: 426 × 987 cm and practically miraculously survived both world wars.

Down from Plac Trzech Krzyży, on the terrace reaching the Vistula escarpment, we will find wonderful spaces for recreation. Their name comes from the green Italian town of Frascati. The history of the gardens began around 1779. Over the following centuries, an exclusive villa district was built on their premises, and closer to the Parliament, luxurious tenement houses were built. Today Frascati is a part of the upper part of the Marshal Edward Smigly-Rydz Park and it enchants with its numerous picturesque streets and alleys leading between densely growing trees.

The elegant street starts from Plac Trzech Krzyży and ends at Belwederska Street. On one side there are exquisite tenement houses, palaces and villas, which often house embassies and state institutions – including the seat of the Government and the President. On the other side of the Avenue there are wonderful green areas – Łazienki Park and Ujazdowski Park.